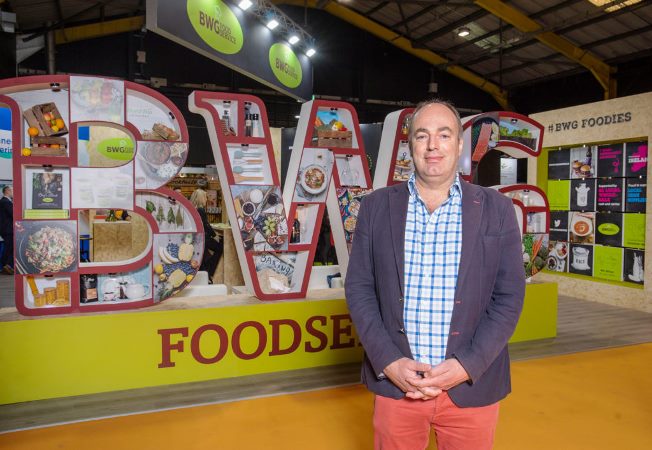 The Mind of the Palate with BWG Foodservice

“The pleasures of the table reside in the mind, not in the mouth” – perhaps the primary message that Professor Charles Spence of Somerville College Oxford has been demonstrating at Catex 2019 in the RDS Simmonscourt.

Professor Spence was invited to Catex by ourselves and has been giving fascinating mini-symposia at regular times throughout the event. Spence is perhaps best known for his work with Heston Blumenthal, and Sound of the Sea, the dish they created in 2007, has been on the Fat Duck’s menu ever since.

While the seafood varies with the season, the appearance of the dish has remained much the same – with edible sand and foam surrounding the seafood (and actual sand visible below it through a glass tray), plus a large conch shell with headphones which plays seagulls and crashing waves to evoke a seaside atmosphere while you eat tasty morsels that originated there.

“It may seem obvious to us now that the sound of the sea would enhance the experience of eating shellfish, but it simply wasn’t before we did it in 2007,” says Spence.

Spence is proposing nothing less than “a new science of eating”, where restaurants and food manufacturers are encouraged to examine everything about food beyond its flavour – how it sounds when you eat it, the plate or bowl it is presented in, and literally everything else from the ambient sound to the lighting to the eating utensils.

Jozef Youssef, of Kitchen Theory in High Barnett in North London, has taken Spence’s science of gastrophysics to the next level and offers a 10 course tasting menu with projection mapping of the sea onto your table, while you eat jellyfish with a tweezers (“Cutlery is boring!” declares Spence) as well as playing with sounds, textures and visual elements throughout the meal.

On a practical level for restaurants, Spence is quick to admit that most will not be able or willing to put in projectors, adjustable mood lighting or directional microphones over every table to enhance the senses of diners, but he believes they should at the very least pay attention to cutlery and plates, if not necessarily designing a new plate for every dish.

“It is a fact that heavier cutlery enhances the dining experience,” he says, “And don’t underestimate the plate – in a study we did with Ferran Adria in 2012 we found the plate really does make a difference – a sweet strawberry dessert tastes less sweet on a black plate than on a white plate and subsequent studies have replicated this – for example we now know that chilli tofu tastes spicier on a red plate.”

Spence believes that the avenues for research are endless. “Can we accentuate the texture or flavours of a food by the plate it is on, what about in first class on an airline – can the plate enhance flavours to compensate for the dulling down of our senses that occurs in flight?”

The Fat Duck is leading the way in this of course, and recently commissioned special plates for dishes to enhance certain flavours – for example, a round pink softly shaped bowl for sweet foods and a darker bowl with a rough texture (to be held in the hand) for spicy foods. The Fat Duck also has a dessert spoon covered in fluff but with extra weight and added sweet heliotrope aromas that are released once the utensil is grasped.

Spence was also rather dismissive of companies who posit that every wine style deserves its own glass shape. “If you don’t let people see the glass or touch it, then grape specific glasses perform no better than random – seeing and holding the glass is what seems to make the difference, not the shape,” he says. “It really is all in the mind,” he repeats.

Spence’s work is fully science-based and his experiments have been replicated by other scientists, so this is not speculative chicanery. His book Gastrophysics (https://www.kennys.ie/results/?q=gastrophysics) published in 2017 is recommended for everyone in the food world, from chefs to diners to food manufacturers.

For his next trick Spence is hoping to focus on coffee, which has more volatile aromas than wine and yet no research has been done on the most suitable drinking vessel. “With 4 billion cups of coffee drunk every day it is about time someone tackled the issue,” he says.

If you are at Catex definitely drop over to the our stand and try eating some ginger biscuits while rubbing sandpaper, and then while rubbing silk see which tastes better – you will be surprised.

Ricky O’Brien, Foodservice Director at BWG Foodservice, talks about the pride he and his team feel in sponsoring the ‘Chef of the Year’ category at this year’s Gold Medal Awards. It is not an exaggeration to state that the hospitality sector has been one of the industries hardest hit by the Covid-19 pandemic and the…

It Wouldn’t Be Christmas Without Turkey & Ham!

Our premium Turkey and Ham portions are an ideal time saver this festive period. All our portions are produced from natural turkey breast and home-cured gammon with a delicious high quality butter-based stuffing. Our turkey is cooked in a way that retains flavour and moisture. The ham is slow cooked for a succulent flavour and…

Coolhull Farm is a family-owned Irish company founded in 1990 by Tomás Murphy who began making ice cream using a classic Italian recipe on his dairy farm, at Coolhull, Co. Wexford. The company specialises in dairy and makes a full range of premium ice cream, baked desserts and dairy desserts using the raw milk and…